Editors Note: Photography changed everything. Photography freed up the painter from direct and indirect representation. Picasso would not have been possible without the revolution of photography.

: time and space collided on a piece of light sensitive paper to reveal human images.

Photography transformed our imagination, our intimacy, our class consciousness, our cultural work and made us into witting and unwitting witnesses to class power, wars, massacres, napalm, peace, love, risks, art and even photography herself.

David Bacon has been covering community justice struggles, the daily lives of workers, reporting on cutting edge issues of immigration, labor and life under the throes of capitalism as a journalist and documentary-photographer for decades. David Bacon is a street and workplace photographer, his work is working class documentation and insight into the dreams and the poetics of working class communities, steeped in histories and struggles for a better life.

“My studio is the street: Photoessay by David Bacon” David writes, is his homage to the U.S.-born Mexican photographer, Mariana Yampolsky. Yampolsky went to Mexico, took up life there, and ended up creating a landmark oeuvre that has contributed to defining and projecting Mexican-ness. David Bacon follows in her footsteps, except his journey and work has been to go back and forth across the borders between the U.S. and Mexico. David has brought together in words and photographs our mutually interconnected spaces and struggles. David’s photography contributed to defining and capturing the new transnational working class-ness of living and organizing and imagining the new possibilities of justice without borders.

My studio is my the street

Mariana Yampolsky left the U.S. in 1945, when she was 20. She became the first woman in the Taller de Grafica Popular (the People’s Graphic Workshop), an anti-fascist project started in the late 1930s by Leopoldo Méndez, Pablo O’Higgins and Luis Arena.

Yampolsky was a socialist, and worked for many years with the Secretariat of Public Education, during the period when it was staffed by progressive educators dedicated to bringing schools and literacy to rural, especially indigenous areas.

She became one of Mexico’s best-known photographers, taking photographs especially in the streets of Mexico City. She said, “If I have to define my photography, I’d say my studio is the street.”

In Mexico City people do live a good part of their lives in the street — eating, arguing, reading, meeting lovers. This series of photographs shows some of that life in the street. It is my tribute to Mariana Yampolsky: 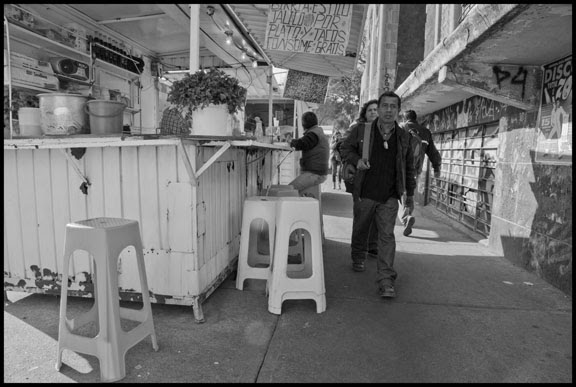 People pass by the lunch counters where Mexico City’s working class gets a snack in midmorning, or a bigger meal in mid-afternoon. This one advertises a good deal — goat stew by the plate, with tacos and soup thrown in. 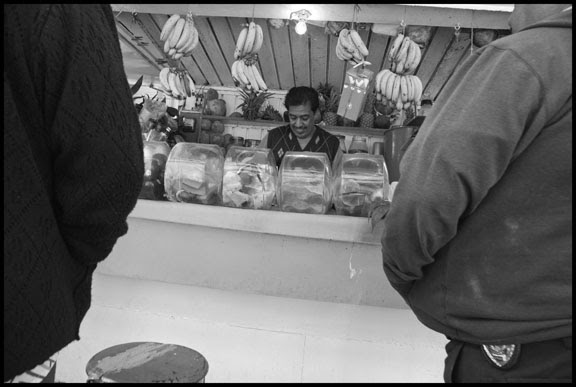 A plainclothes cop, his badge showing, and his friend get a licuado from the fruit stand, choosing from bananas, pineapple, guava, papaya, oatmeal, milk or orange juice. The fruit stand is a neutral zone — so long as people have their 20 pesos, everyone gets treated the same way and the cops don’t bother anyone. 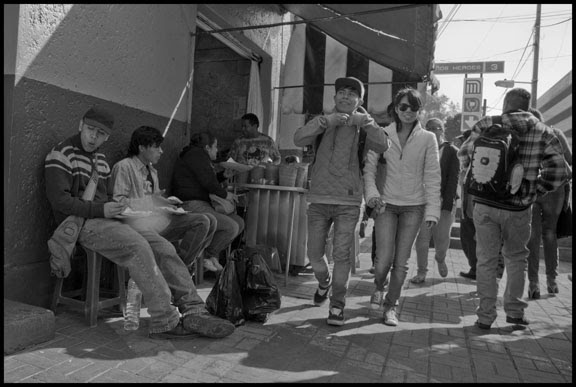 Young workers eat and hang out by the Niños Heroes subway station, making faces about at the students walking by. Maybe they’re a little jealous, since they’re out of school and working already. 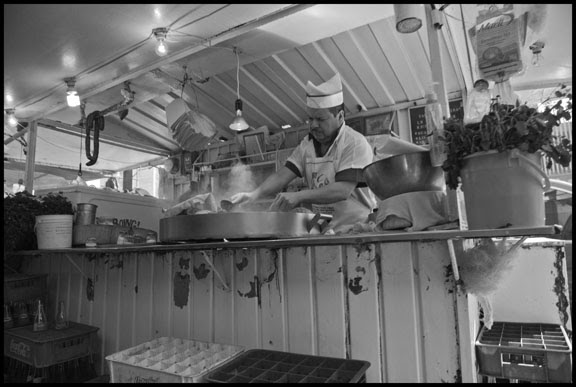 The cook at a stand fries up the meat, getting ready for the lunch rush. Napkins hang from the roof, and customers will sit on the soda crates stacked in front of the counter. 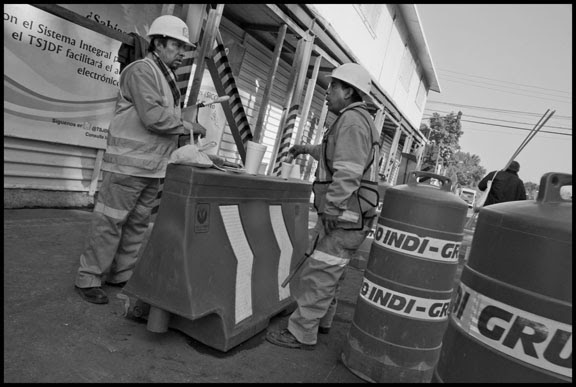 Two construction workers argue with each other while they eat their merienda (their morning snack).  They’re repairing the street in front of a building project.  These guys have good jobs — they’ve got safety gear and work clothes.  Maybe they work for the city, or a big company. 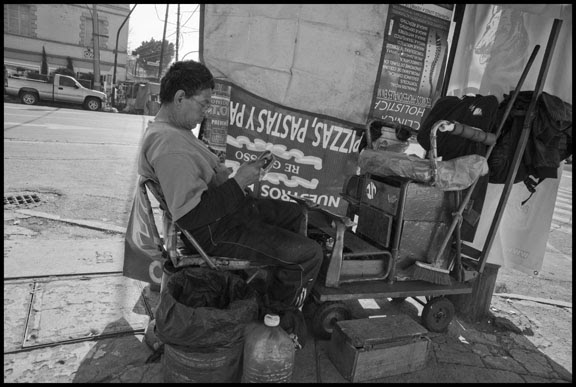 Everything happens in the street. The shoeshine man reads his newspaper while he waits for another customer. He’s been doing this work for a long time on this corner. Maybe it doesn’t pay a lot, but he gets a chance to read. People read books and newspapers all the time on the street in Mexico City. The Mexican photographer Nacho Lopez shot a famous photoessay in the 1950s of people reading in the street, “Mexico Lea,” and Tina Modotti also took well-known photos showing people’s desire to read and get educated politically.. 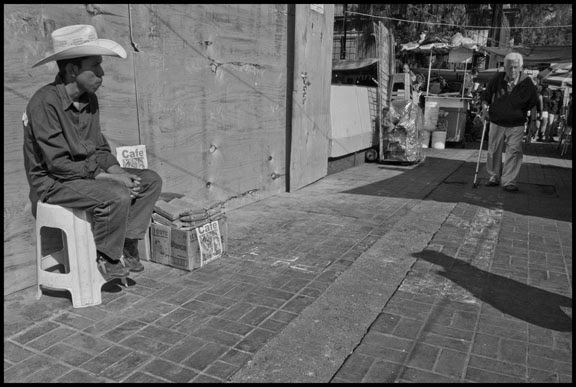 A campesino from the countryside has come into the city to sell the coffee from his hometown — “Cafe Natural.”  He hopes that the traffic from the Ciudadela park will bring him customers, since there’s a long string of stalls on the sidewalk just outside it for books, food and trinkets. He doesn’t have the money or goods for a stall, though — just the bags of coffee to sell and a plastic stool to sit on. 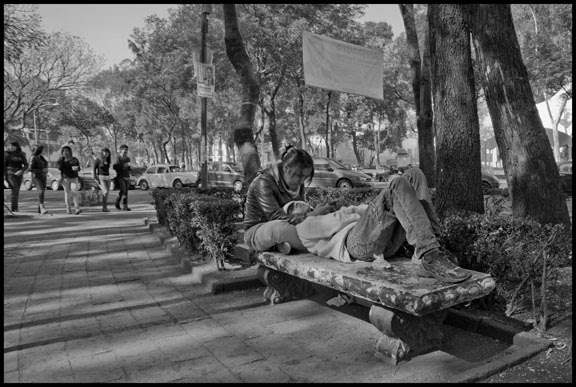 In the Ciudadela Park, two students on break from class get a chance to be together. This young woman is more interested in her cellphone than her boyfriend, though, probably because he’s fallen asleep instead of paying attention to her. 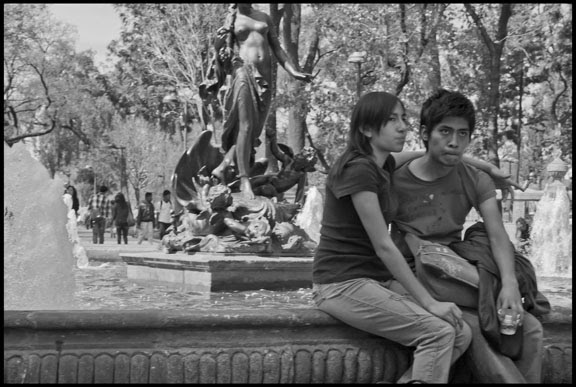 Another pair of young lovers thinks about how to get together. Most young people live at home, and don’t have many places to go to be with each other. Behind them Venus rises from the spouts of water in the fountain. 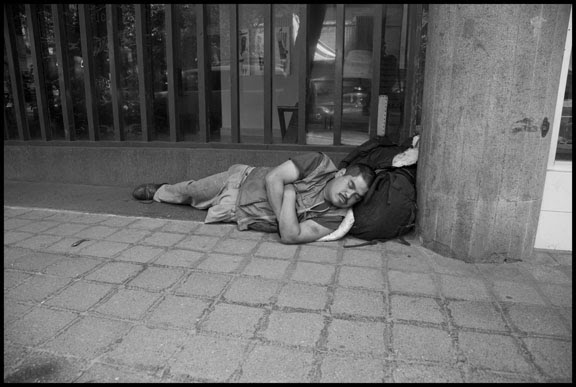 A man with one leg sleeps on the sidewalk, in front of an office building. More and more homeless people sleep on Mexico City streets, even during the day. He isn’t chased away because the building tenants have sympathy for his disability.

Interviews with David Bacon about his new book, The Right to Stay Home:

Book TV: A presentation of the ideas in The Right to Stay Home at the CUNY Graduate Center
http://booktv.org/Watch/14961/The+Right+to+Stay+Home+How+US+Policy+Drives+Mexican+Migration.aspx

The Children of NAFTA, Labor Wars on the U.S./Mexico Border (University of California, 2004)
http://www.ucpress.edu/books/pages/9989.html